Pro Users can add realistic camera shake to their footage or null objects with this powerful script.
Account
Upgrade to Pro
LoginRegister

Pro Users can add realistic camera shake to their footage or null objects with this powerful script.

Publication Date: 2021-01-31Sample Preview:
Using this item somewhere awesome?
Tag to connect with the community and you might get a shoutout! TwitterReddit

There’s something unnatural about the well-known wiggle expression. It’s fair to say that this sort of shake is too perfect.

If you watch over a hand-held video recording, you’ll be quick to notice the immense differences between handheld footage and the go-to wiggle expression.

While the wiggle expression does create a shake, it’s mathematical, where it smoothly interpolates randomly generated keyframes between intervals of time. In the real world, camera shake has a huge range of factors that can influence it: footsteps, wind, and weight of the camera are just a few!

This is why we have created our After Effects script, Crate’s Camera Shake!

The toolkit can create a fully-realistic camera shake with only the click of a button.

It’s fast, fully customisable, and is packed with features. So how does it work?

We’ve tracked and analyzed several different pieces of footage, all recorded in different scenarios. Earthquakes, running, handheld and more are all part of the bundle to choose from. Once you browse the built-in library of shake presets, you can then apply it directly to your footage. It’s that simple! 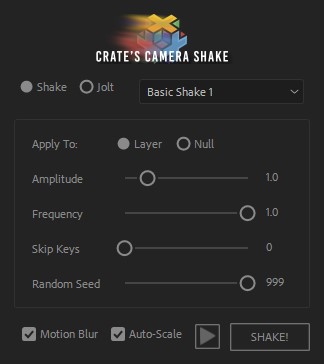 Amplitude – The strength of the shake.

Frequency – The speed of the shake.

Skip Keys – Reduce the density of keyframes (a value of 2 will place a keyframe every 3 frames instead of 1).

Motion Blur – Have the script automatically set up motion blur to the shake.

Auto Scale – The script will calculate the perfect size for your footage so that the shake does not have it drift out of frame.

We’ve also implemented a Jolt for you to choreograph your perfect set of shakes. The Jolt will be applied wherever your timeline scrubber is on your timeline. You can generate a null with the shake or apply directly to your layer.

These can be applied directly into the shake animation wherever you need, and give an impact to your footage. Jolts are perfect for explosions, impactful footsteps, or something rushing past the camera.

Crate’s Camera Shake After Effects Script is exclusive for our Pro Users. The Pro Content continues to grow rapidly, sign up today!

We’ll be using this script in nearly every video we create and know you’ll find it as useful as we do.

Want to check out our other scripts? See them here

ProductionCrate is the webs #1 archive of top-quality production-ready assetsserving 1,000,000+ happy producers around the globe